Daemons and Daemians together at last

Welcome to Daeblog Forum, register to view the full board, meet your daemon, find your daemon form. If your a guest and you just registered post in the 'Technical Issues' thread for a activation, you probably won't get activated unless this step is made. Enjoy Daeblog Forum, finding your daemon, finding your daemons form, and being a member on Daeblog. This is a message from Admin, we hope you enjoy your stay!
Log in
Who is online?
In total there is 1 user online :: 0 Registered, 0 Hidden and 1 Guest

» Wish upon a star thread

Well, here's a thread for daemon describing. I'm gonna do it, so you can follow my lead. :3

My daemon Cody is a settled Bernese mountain dog. This reflects my confidence, laziness, and sociability. Like a Berner, I'm hardy and sensitive. I can be described as bubbly and friendly, and easy going. I would never desert a friend, and am intensely loyal. Dogs may not be seen as cool, but I think they're the best little (and in my case, big) things in the universe. <3

Cody's personality, huh? Cody's cynical, sarcastic, uncompassionate, and immature. He's not helpful and probably couldn't be considered lovable, like most peoples daemons might be described as. He's stone hard and loud, but deep down he might just have a soft gushy inside. <3
Might. XD
Anyway, Cody's surprisingly fierce and loyal, and not to mention aggressive. He's determined and stubborn, and the passionate one of us. When I'm being submissive, he's snarling and telling me not to give up. He's amazingly devoted for someone so cynical and hard. He's no softy, and makes me find my own solutions. And you know what? I think it makes me a better person than if I had a softer daemon. :3
~~
Maybe I'll post more buuuttt

Holy crap you posted a lot about your daemon. I don't know if I can talk that much, I'd like to try.

Taziumi is a settled cream pomeranian. He reflects my understanding, spazyness, and moodiness. He's my best friend, he's always there for me and he understands me when I'm confusing myself for no good old reason. Taziumi (or Taz for short) is also very honest, if I need someone to tell me if I'm typing this to you wrong Taz will tell me, but they if he lies I lied to myself and that doesn't seem to make total sense for daemish.

Taziumi's personally is slightly different from mine, he has opinions about everything in the world and he isn't afraid to share them to me all the time but then no one hears me, sometimes I even have to ignore him. *Giggles*

Taziumi is very determined will likes to add more things than he can carry on his back (Expression of speech) Doing multiple tasks at a time I should of said. He is a good leader but likes to follow for the sake of following.

I'm not too sure if this was enough, if not I'd love to add more


Alexis~
Quite lazy, and a thinker


Taziumi~
Quite loud, and random 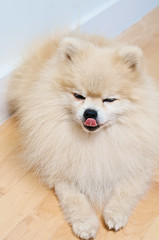 My daemon is Adrial. He is a jaguarundi and has been stable for quite a while now. I've got a good feeling it will be our settled form soon too. xD
Anyways, jaguarundi fits because I am sort of shy and don't like to be thrown into uncomfortable situations :3 It also reflects my cheerful, yet subdued personality. Woo X)

Ade's personality is somewhat like mine. He is much more outspoken and daring then me. Ade likes to be sarcastic and often pretends he could care less about what I do. He is quite lovable when he wants to be though xD Ade is very intellectual. He's the logical one of us. He's the one who thinks about the consequences or rewards of certain things before I do them, so I don't end up getting myself in trouble xD
We compliment each other very nicely and I would never want him to be any other way <3
I fail at describing so.. thats that! xD
I may add more later too. :3

Can't really post a lot about form wise. But I'll go into the personality.

Mo is rude, arrogant, and loud. He loves to yell at people when I can't or won't in certain situations. He makes very mean comments about people I deal with on a daily basis, and insults pretty much everyone I know. It's all just for fun though, most of the time. Unless I really dislike someone, the teasing from Mo is all in good fun.
He is also very unhelpful most of the time. He forces me to solve my own problems and stay strong. If I ask him a question, he'll usually reply that I should figure it out myself. He pushes me to be the best that I can be, and beyond. He points out all the little flaws in my work and such. But he has his moments...
When I really need him, when I'm upset and frustrated and fed up with the world, he comes down off his high horse and is caring, lovable, and kind. He'll comfort me, joke with me if that's what I need, and assure me my work isn't crap. He'll tell me what an amazing and wonderful and smart person I am. He'll get me back on my feet again.

Well, that was long and rambling. xD Welcome to Doe's crazy brain.